When the term ‘Friend zone’ first came out online, all these memes started to appear on facebook, and I didn’t really think much of it. Then the term started to come into popular culture and people had started to use the term in everyday life and use it as an actual social convention. After over a year of that, I have come to loathe men who use the term friend zone.

So, for those who don’t know, the word friend zone is typically used by males (heterosexual) to refer to the state where this guy really likes this girl but this girl does not like the guy back, saying he is “a really good friend”, and thus the guy is stuck in the friend zone. Examples of memes created on the internet which are about this term are the following: 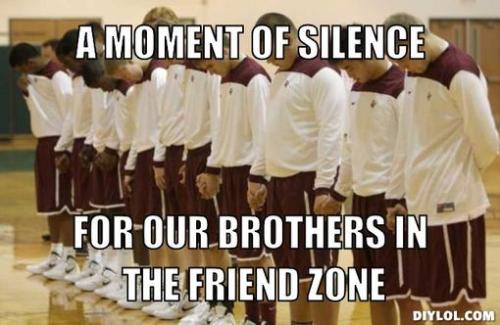 From the two images shown above, the second image is the one I really can’t stand. Anyone who regularly uses social media will most likely have seen a picture alike to this. “A moment of silence for our brothers in the friendzone.” Blegh! I don’t like that kind of picture at all. It asks us to be sad that the man hasn’t got the girl he wants, and through creating sympathy for the male, it then antagonises the female for not submitting herself and becoming his girlfriend, irrespective of how good or bad the male is.

This brings me to my point of why I hate the term (I’m not the kind of person who often hates things): It is used by heterosexual males to validate their egos that females should and have to date them, and that it is absurd and unreasonable for that said guy to be refused by a woman. And for the men who still think that this term is an appropriate term, well here’s a new flash: Maybe you’re actually single because you’re an arrogant asshole with a sense of gender entitlement.

And, it is for this reason, I am actually quite glad for the new trend of #yesallwomen that is emerging. An example here is one that I quite liked:

Even if you’re still shaking your head at this article (which I hope to god you’re not), take a time to look at this page that one of my friends posted on facebook last night, which I then looked up. It just reaffirmed for me how harder life can be for women, and also opened my eyes more to the state society is still in.

We say we have reached gender equality. WE HAVEN’T.

This takes me back to last year, when I still straightened my hair, and I also wore makeup too. But my makeup, alongside my hair, made me look a lot more feminine. People even said that it looked androgynous. I got mistaken as a female a lot in public (I would just laugh warmly to myself and reply “Oh, sorry, I’m actually a male.” 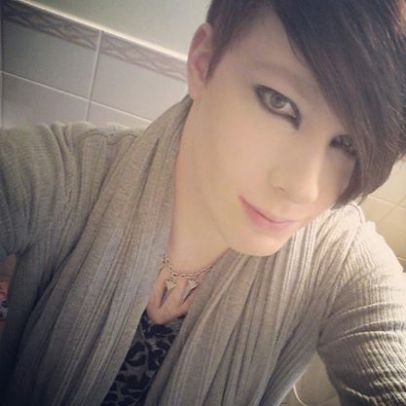 During this time, where through the eyes of a a number of people, I was seen to be a female (even though you can see chest hair, why dear god why?), I did experience a heightened amount of sexual objectification from heterosexual males. I remember on a couple of occasions I was wolf whistled from men who would pass in their cars. Then sometimes cars would slow down to drive past me. On another occasion, though, in September last year I remember it was, I was feeling peckish, it was late, so I went out to get some McDonalds, was walking back at night when I passed an ATM. There was a line with a few guys. As I was walking past, eating my fries out of my McDonalds bag, there was this 20 something year old male (who looked for the most part to be heterosexual, from what I could tell), he said “Mmm you babe, you look so fucking sexy eating those fries.”
My eyes widened, I thought “What the fuck”, and then I rushed off home at twice the speed I was already travelling at.
This kind of crap continued until I changed my look to a more male-like look around the start of this year.

We say things like “You shouldn’t show so much skin, slut.” or, “you whore”. All these derogative terms being prerogative to females, and usually having the implication that a woman is being sexually provocative because she is wearing a certain cut of clothing, or acting in a certain way. And through that, she is asking for your arousal.
NO.

All you’re doing from the side of the female is perceiving what she is wearing. Visual input. Nothing else. What you’re doing yourself is then thinking, from your views and values linked in your brain, to think “Slut. Whore.” Which is then you objectifying. We don’t say “Oh, that guy is wearing short shorts that make his ass look so tight. He is such a slut who is thirsty for vagina.”, which just proves this. It’s a construction in our brain. It’s not them offending our eyes: it’s our brain offending their freedom.

And from the perspective of a linguistics student here. We can immediately label many different terms to degrade a woman based on her sexual activities. But for men? We have to think for a while, and then  even then we come up with manwhore, most likely: a word which has stemmed from a word originally used on females, but had ‘man’ added to it. So it shows that from even a semantic perspective, language is set up to degrade women and objectify them.

And at this point, I also want to give heterosexual men advice: it is not attractive when you hit on women in public. From my experience of my females friends confiding in me and having discussions, they often say that they feel uncomfortable when a guy approaches the in public and tries to make an advance on them, and have used the saying “Oh sorry, I’m already taken”, instead of saying “Sorry, you’re making me feel uncomfortable.” – and it makes me feel disgusted that we live in a society where a lot of men respect another man’s ‘possession’ (disgusting word in this context) over a woman rather than a woman’s rights to not be invalidated.

A question to the straight men reading this: How would you feel if I hit on you? A gay man like me, hitting on you? Saying that your ass looks nice.. Yeah, pretty damn sure you’d feel uncomfortable. So have the common sense to look on it on both sides.
Maybe this is why I enjoy hitting on straight men, especially the ones who objectify women. It makes you feel uncomfortable in the way that they feel; but you, in your egocentric state, cannot take it.

Learn to take your own medicine.

The media can be blamed for this, too. A picture below can show what I mean:

So, in our brains, it probably looks normal for the female to pose that way, and to present herself in a way that is provocative and awakens sexual arousal for those who are attracted to women. But the men? No. In our brain, it does not look right. This is a construction in our society that needs to be broken down. As long as advertising like this looks irregular and you can notice a distinct difference in normality between the two, I will not be happy.

This is why we need feminism. Women are still in a disadvantaged position in society,
Of course, there are the femi-nazis. But a lot of feminists out there are females who are aware of the inequality and trying to make a difference about it. And can I just say, from the perspective of one male. I have a lot of respect for you.

I am just going to finish this off with a video I watched the other night.
http://www.youtube.com/watch?v=V4UWxlVvT1A&oref=https%3A%2F%2Fwww.youtube.com%2Fwatch%3Fv%3DV4UWxlVvT1A&has_verified=1